1824 - New York law passed to establish county poorhouses in New York, directing counties to purchase one or more tracts of land not to exceed 200 acres and build suitable buildings to house the poor.

1829 - The County of Livingston purchased approximately 136 acres of land on both sides of what was known as Canandaigua Road (Rt. 20A) in Geneseo for use as a poorhouse farm. The original building was located on the south side of the road with additional farm land on the north side. The poorhouse was ready to receive paupers by June of that year.

1849 - The Board of Supervisors approved plans to build a new facility on the north side of Canandaigua Road and to sell the 18 acre parcel on the south side.

1850 - A three-story brick building was completed. The central portion was occupied by the superintendent and family, and the men and women residents were housed in separate wings. The markers from the original burial ground were removed, but not the bodies.

1868 - In February, a fire broke out and five “insane” women confined to their cells in the back of the building were burned to death. Later that year, the second brick building next to the first building was completed to house people with mental illness.

1874 - Overcrowding made it necessary to add an addition to the 1868 building.

1878 - The county purchased an additional 33 acres of land, expanding the poorhouse and farm property to approximately 150 acres.

1879 - The third brick building to accommodate poorhouse residents was completed. To comply with a state law passed in 1870 making marked graves mandatory, numbered headstones were erected in the burial ground to correspond with the names of the deceased listed in the County Poorhouse deaths book. Compliance with this law was spotty as many graves remained unmarked.

1890 - First telephone to the County Poorhouse was approved by the Board of Supervisors.

1892 - All people at the County Poorhouse who were designated as insane were taken to the Willard Asylum for the Chronic Insane, a state institution, by order of the State Commission in Lunacy. The name of the County Poorhouse (sometimes referred to as the County Almshouse) was officially changed to the Livingston County Home.

1894 - Electric lights were installed at the County Home.

1900 - In the first few years of the century, the State Board of Charities cited numerous costly improvements the county should implement to modernize the facility. The county continued to allocate a major portion of the county budget towards maintenance of the buildings and farm while attempting to provide high-quality care for the residents at the lowest cost.

1905 - Many renovations of County Home buildings were completed; however, reports in 1907 revealed that parts of buildings remained in poor condition. The sewer and drainage system continued to be a problem for many years. State inspectors’ reports started to improve beginning in 1908 with more Board of Supervisors’ oversight of the superintendent of the poor.

1906 - A resolution was adopted by the Board of Supervisors to set apart a suitable space from the county farm for the purpose of a cemetery, with a section for Protestants and a separate section for Catholic inmates. This is the cemetery plot along what is now Volunteer Drive. Although the plot was approved in 1906, no burials there were marked until 1918.

1914 - The state inspection report noted that the “new” cemetery was in use but no markers placed and many markers in the “old” burial ground behind the County Home had been “misplaced.” For the first time, old age was the most common reason of residency at the County Home for both men and women.

1917 - As the U.S. entered World War I, Superintendent of the Poor James J. Gilmore pleaded with the County Board of Supervisors for a greater budget allocation to cover rising costs at the County Home.

1918 - The state inspection report stated that the County Home had an outbuilding for a mortuary, good caskets and shrouds were provided, graves were marked with numbered stones, and detailed record maintained.

1919 - The report of the County Board of Child Welfare stated the influenza epidemic hit Livingston County in January and “claimed many victims and greatly added to the number of dependent widows.” The impact of the influenza epidemic on the County Home is unknown as no mention of it was contained in the state inspector’s or superintendent’s reports of the time period.

1925 - Livingston County purchased a 36-acre parcel west of the County Home property. Total acreage for the County Home now exceeded 180 acres of mostly tillable farm land with a wide variety of livestock, crops, and fruit trees. Some butter and eggs were sold.

1926 - This was the last year the County Board of Supervisors’ Proceedings listed the names and causes of death of residents of the County Home and where they were buried.

1928 - Once again, the state inspection report (as it had since the 1800s) emphasized the need for the County Home to have a fully equipped hospital to promptly treat and care for the residents onsite rather than sending them to Warsaw Hospital.

1929 - The stock market collapsed, sending shock waves through the economy and triggering the Great Depression. The top causes of commitment to the County Home for both men and women were destitution and sickness.

1930 -The state instituted the new Public Welfare Law designating the superintendent of the poor as the commissioner of public welfare. The law dictated the commissioner’s responsibilities encompassed all branches of services of the poor, with the exception of the widow’s pension, which functioned separately.

1933 - Outdated terminology including “county poor,” “superintendent of the poor,” and “almshouse inmates” were stricken from official records by the county rules committee and replaced with “county public welfare” and “County Home.” The dairy herd at the County Home was accredited and milk and eggs were sent to the jail with several dozen quarts set aside per week for County Home use.

1935 - Livingston County purchased a 44-acre parcel adjacent to the County Home for additional farm land, expanding the total acreage of the farm to approximately 225 acres.

1945 - Plans were approved for four new buildings, including an infirmary, an office building, men’s and women’s residences, and a new residence for the commissioner and family. None of the plans came to fruition until 1964.

1946 - Legislation modernized the welfare system, providing for substantial increases in state aid to the county for welfare purposes.

1955 - The Board of Supervisors voted to discontinue operation of the farm and dispose of its assets as of December 1956. The decision was due to the continuing drop in population at the County Home and lack of able-bodied residents to help with the farm.

1964 - The newly constructed 130-bed Livingston County Home and Infirmary, located directly south of the three brick County Home and Public Welfare buildings, was completed. The old buildings continued to be utilized for various county departments and programs until the 1970s.

1983 - The Board of Supervisors contemplated demolition of the three brick buildings that had become too costly to maintain. This decision sparked a local preservation movement to save and restore the architecturally and historically significant buildings.

1989 - The three brick buildings were sold and the center building was remodeled to operate as the Oak Valley Inn.

2001 - The New County Poorhouse Cemetery, originally laid out in the early 1900s and completely overgrown with brush, was revealed during construction of Volunteer Drive.  A group of individuals created a small park to honor those buried there.

2004 - The Young at Heart group began annually hanging wreaths at the Old County Poorhouse Cemetery behind the County Home buildings in memory of those buried there.

2018 - Greg O’Connell, who purchased the three brick buildings in 2010, received a large state grant to invest in the development of the westernmost building as a restaurant and brewery, the first major renovation of this building since its construction in 1879.

2021 - The County Historian’s Office identified more than 320 individuals buried in the poorhouse cemeteries in mostly unmarked graves. The three old County Poorhouse and County Home buildings have been renovated and are nearly fully occupied by businesses.

It is estimated that over 640 people were buried on County Home property between 1829 and 1940. About half have been identified by name, and just under 200 have a grave marker, inscribed with a number or initials.

The earliest cemetery, used from 1829-1850, was located on the south side of Route 20A near Reservoir Road. When the poorhouse 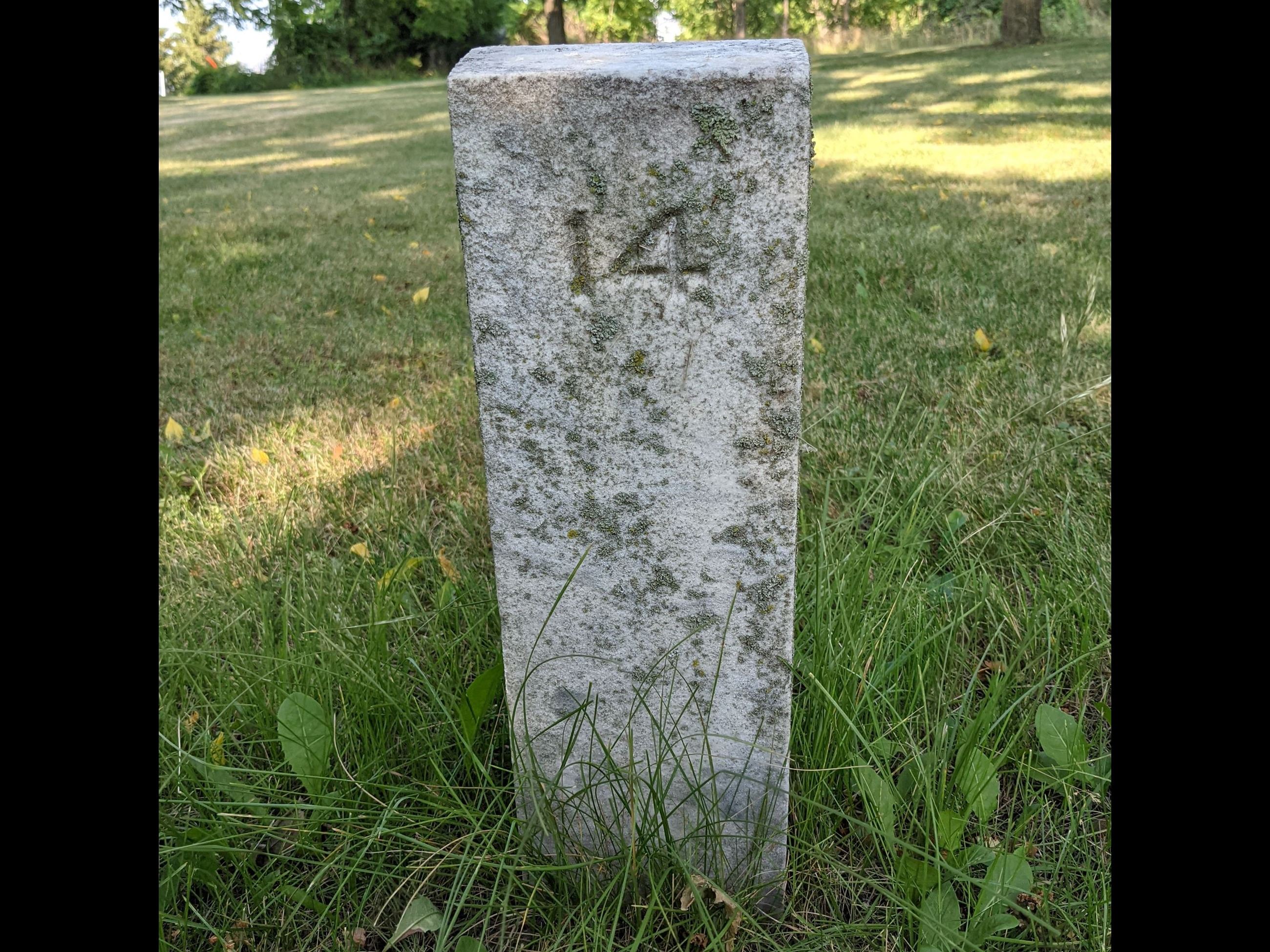 complex was moved across Route 20A and the land was sold, burial markers were removed but bodies were not.

The Old County Poorhouse Cemetery, behind the three brick County Home buildings on Millennium Drive in Geneseo, is the resting place of those who were buried between 1850 and about 1907. Here there are approximately 134 gravestones carved with a number, but many more graves are unmarked.

The New County Poorhouse Cemetery lies along Volunteer Drive across from the Wegmans plaza and was established in late 1907. The last recorded burial in a county poorhouse cemetery was presumably made here in 1940. Click here to jump to the New Cemetery section.

Below view a list of names of those identified as being buried in the Livingston County Cemeteries. Those buried prior to 1874 are not known with certainty and are not included. Due to the nature of the historical records used, there may be spelling variations, unintentional omissions, or erroneous details.

Markers in this burial ground have only a number, with two exceptions. Using poorhouse records, names were matched to the numbered stones, though there are several instances of two names being assigned the same number. If the Inscription column is blank, the grave is unmarked as of 2021. Known burials are also listed on FindAGrave.com.

This cemetery has some headstones carved with initials and an age. Using many historical records, the Livingston County Historian's Office has made potential matches to names. Known burials are also listed on FindAGrave.com.