Conesus Lake is approximately eight miles long and a mile across at its widest point. The surface area of the lake covers 3,240 acres or a little over five square miles. With an average depth of only 38 feet and a maximum depth of 66 feet, Conesus Lake is one of the shallower Finger Lakes. The lake is situated at approximately 818 feet above sea level.

The northern basin is shallower than the southern basin with a large area of water less than 20 feet deep at the very north end of the lake near the outlet and Vitale Park. Deltas project into the lake from the resulting sediment carried by gullies and streams into the lake forming many localized coved areas along the shore. Akin to the steep slopes on the valley walls that characterize the Finger Lakes region, the lake depth drops sharply along the shoreline, especially in the southern basin.

Conesus Lake is a dimictic lake, meaning it mixes, or “overturns,” twice a year during the spring and fall when the water temperature is uniform throughout the depth of the lake. During the summer, the lake is stratified with warmer, less dense water at the surface. Ice cover during the winter also leads to thermal stratification. During mixing, nutrients stored in the sediments can be brought up into the upper reaches of the water column where plant life grows.

Lakes can be classified based on their level of productivity (abundance of algae, plants, and other aquatic life forms) on a scale of “trophic state.” Oligotrophic lakes are nutrient poor and low in productivity. Eutrophic lakes are well supplied with nutrients and support an abundance of algae and plants. Mesotrophic lakes are intermediate in nutrients and algal/plant abundance. Scientific measurements of algae and nutrients like phosphorus and nitrogen determine trophic status. According to the Ten-Year Update of the Conesus Lake Watershed Characterization Report (2013), Conesus Lake is classified as slightly eutrophic and is trending towards becoming mesotrophic, as projects implemented in the watershed improve water quality in the Lake. 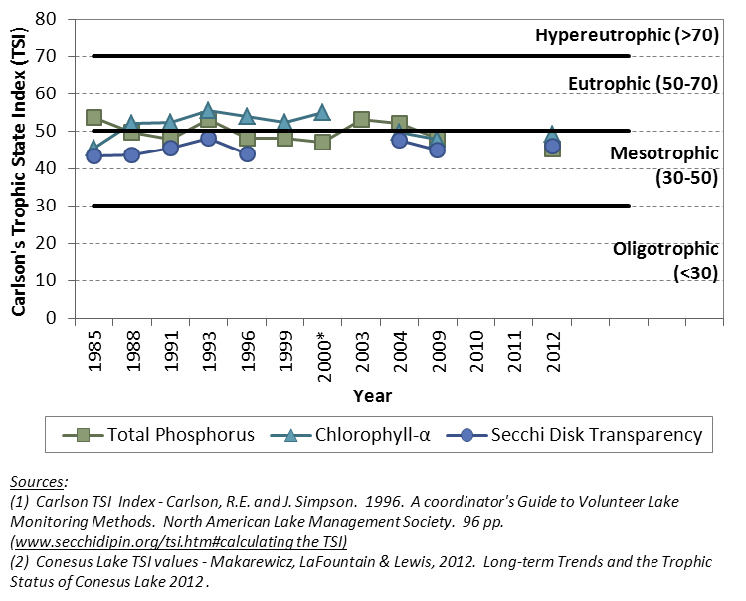